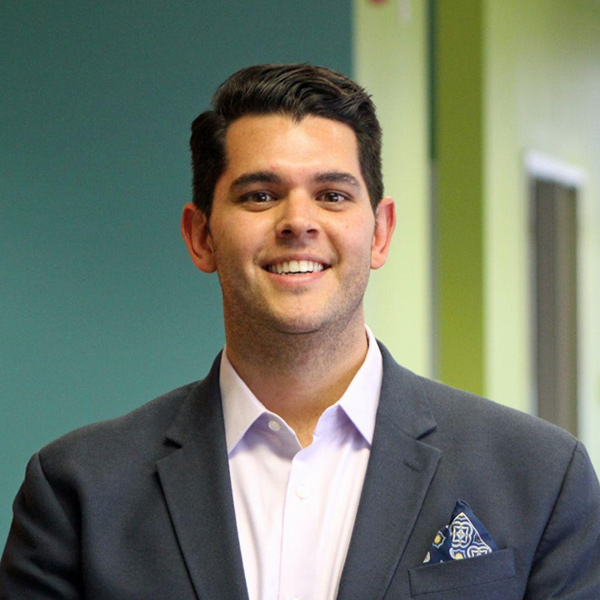 For Eddie Rangel, the secret sauce to being an effective educator includes three major elements: 1) Identifying what children are passionate about 2) Holding each student to high standards and 3) Building trust with students. With these elements, educators can become more effective at supporting student development as well as their own development as educators.

Eddie Rangel has served as an educator for 13 years and is currently the Founding Executive Director and Head of Elementary School for Adelante Schools in Indianapolis, IN. Adelante Schools is a non-profit school management organization that strives to inspire students to be leaders in their communities. Their motto, “pushing onwards towards the future” (the meaning of Adelante), is a marker of the school’s mission to overcome barriers in order to serve students by helping them to reach their full potential.

There are many ways that educators find their way to teaching. For Eddie Rangel, his path to education was charted through music. Through music, he found his love for guiding others to new horizons and it is that passion that still fuels him today. As a sixth grader at his middle school in Southern California, Rangel’s musical talents led his band director to give him the responsibility of section leader for clarinets. It was through this responsibility as section leader that Rangel learned of his gift for helping his peers unlock their potential.

As the second oldest of seven children in a large Mexican-American family, growing up, Rangel took advantage of every opportunity given to him to inspire his younger siblings and family members. After learning that his educational opportunities were different from those of some of his family members and friends, he began to understand how injustice manifested in education. For instance, Rangel and a cousin attended different elementary schools. While Rangel’s elementary school was in a whiter, more affluent part of town, his cousin’s elementary school was in a part of town with a higher minority population and less resources. While the two attended the same middle and high schools, their paths ultimately diverged. Rangel was often tracked with white children and given rigorous homework while his cousin was tracked with more minority students and given less rigorous homework than Rangel.

Understanding this, Rangel took notice when one of his teachers, Mr. Collins, taught the same things to every class. It was this practice from Mr. Collins that led Rangel to want to be an educator that held all of his students to high standards.

Eddie Rangel made his way to Indiana, first, by way of the Indiana University Jacob school of Music and then through Teach for America. After returning to Indiana to serve with Teach for America in Indianapolis, he enjoyed teaching but felt like an outsider. He was far from home and out of his element, but eventually, Hoosier hospitality made him feel welcome.

Along his way, Rangel discovered three key elements for becoming a successful educator. First, he learned to identify what children are passionate about. While teaching music to his peers and then to his students, he understood how important it was to connect with students about things that really matter to them. This way, students realize that their teacher sees them as human beings and not just numbers in a classroom.

Secondly, he learned how significant it is for educators to hold each student to the same high standards. Growing up, he saw how his cousin’s path diverged from his own because they were each held to separate standards by educators. Today, Rangel is intentional about making sure that the scholars he serves are all provided the very best opportunities to ensure that they are reaching their fullest potential.

The third and final lesson that Eddie Rangel has learned on his journey is how to build trust with students. As a leader, Rangel has learned the value of going from what he calls “silly to serious” with students. For students, having an authority figure who lacks vulnerability can limit their desire to trust and learn. Rangel has become very intentional about using every opportunity he can to build trust with students. For example, he once played video games with a student sent to his office for disciplinary reasons. He welcomed the student to play a round of a fun video game and then asked the student what prompted his behavior. The student felt that he could be honest and Rangel was then able to resolve the matter with the student’s trust still intact.

When asked what he would do to enhance the education system in Indianapolis if he had three wishes, Rangel remarked that his first wish would be for every child in our city to be proficient in math and reading (2021 ILEARN scores show that roughly 25% of students in grades three through eight were proficient in math and English). His second wish would be to eliminate funding as a barrier to getting students the resources they need, and his third wish would be to dissolve the false division between private, public, and charter schools. This division, Rangel believes, shifts the focus from students to adults and impedes student success.

Finally, Rangel would also like to see more Latinx educators across the city. Working with MelanatED Leaders, Rangel has supported efforts to cultivate more diverse groups of educators across Indianapolis and would like to develop more Latino educators. According to the 2021 Census, Indiana’s Hispanic/Latinx population is the second largest minority group in the state at 7.3% and is growing every year. As more Hispanic and Latinx families build communities in Indianapolis, it is essential that their children are provided an education that is high quality and culturally competent.

Today, Eddie serves as a leader to some of the city’s most brilliant scholars from all over the City of Indianapolis. Daily, he gets to be the educator he’s always wanted to be.