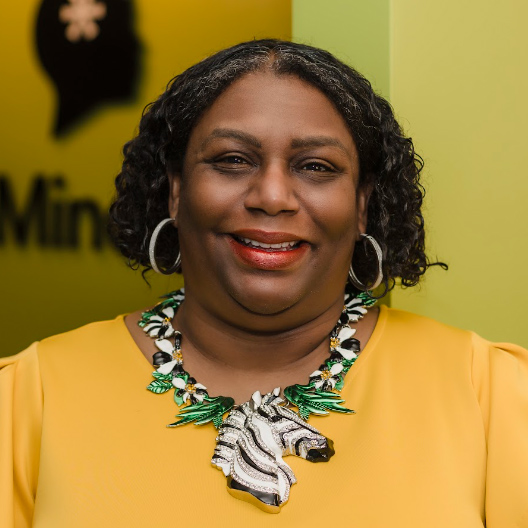 Paula Glover may hesitantly identify herself as an educator, but everyone else knows that she has a gift for serving young people. As a years-long master facilitator for the Center for Leadership Development with a knack for identifying others’ gifts and talents, Paula’s major goal is making sure that every child has access to a world class education.

As a child, Paula knew the value of education. Growing up on the Eastside of Indianapolis, she attended majority white led parochial schools for her entire k-12 experience. To her parents, there was an urgent need for Paula to have what they believed was the absolute best education and so they chose what they thought was the best possible option for her. Though these institutions were touted as the most effective in the city, Paula knows from her experience that these schools were not as perfect as they were marketed to be. While in high school, Paula endured many traumatic experiences as a result of her being one of very few Black students in a predominantly white institution. Many of her white teachers did not give her the respect she deserved and did not have high expectations for her. While the school was touted for its high-quality education, Paula knows that the quality of her education was severely lacking because of the racial trauma she endured. Today, Paula works to make sure that other Black students have educators that give them the respect they deserve and that are equipped culturally and technically with the skills they need for their students to thrive.

As a facilitator for the Center for Leadership Development, Paula ensures this work herself. She has been facilitating for the Center for Leadership Development, an organization that serves to foster advancement in minority youth across Indiana, for the last nine years. She has facilitated a number of programs including the Imani Book Club, Self-Discovery/Career Exploration, Jr. Self-Discovery and College Prep. In her CLD classroom, Paula engages scholars through the art of teaching, and she facilitates learning so that her teens feel respected enough to be themselves while respecting one another’s boundaries. Paula has enjoyed this work so much that she has recruited both of her children to facilitate alongside her.

As she has experienced different facets of the education landscape in Indianapolis, Paula knows that there are many misconceptions about what it takes to be an effective educator. First, she stresses that there are misconceptions about the time commitment that dedicated educators make in order to be effective. Educators work above and beyond regular school hours and often do not have as much downtime during the summers as people generally believe. Paula herself works evenings when facilitating for CLD to ensure that students have supplementary learning opportunities.

In addition to the time commitments educators make, Paula also believes that there is a misconception about the vocation of teaching. To her, educating is an artform and not everyone is equipped to do the work despite how easy or low-barrier it may seem to others. A legacy educator herself, Paula has watched many of her family members command classrooms while creating potent environments for learning. To her, the art of educating must be protected and refined. In her everyday life, she endeavors to do just that.

As Paula continues to hone her own skills as an educator, she believes that the anatomy of an effective educator of color has three elements: 1) Non-judgement of students’ parents, 2) Ambition that guides them to heightened expectations, and 3) A never-ending desire to learn.

As for the future of education in Indianapolis, Paula knows that there is an inevitable shift on the horizon. Educators will reconfigure the conversation on higher education for students and will become more capable of challenging the systems that are not equipped to support the students they serve.

Paula is here to make the way for scholars to have a world class education, and she is not here to lower that standard.