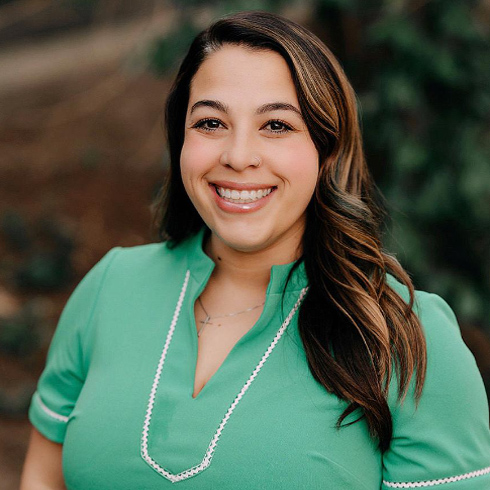 For Stephanie Campos Johnson, leading with love is the most important element of being an effective educator. As a first generation college student and a natural educator, she knows that love is essential to building a thriving education community in Indianapolis.

Stephanie Campos Johnson currently serves as the Principal for Enlace Academy, a K-8 charter school whose guiding belief is that children will learn given the right resources and opportunities. At Enlace, all students are taught with individualized learning plans that prioritize each of their unique learning styles. These guiding principles that drive Enlace are the same ones that led Campos Johnson to become an educator.

Growing up in a Puerto Rican household that spanned between East Chicago, IN and Chicago, IL’s Humboldt Park neighborhood, Campos Johnson understood the value of community, hard work and education from a young age. Hearing stories from her father about growing up poor in Puerto Rico and watching her mother work hard to provide for her two children, she learned that education was the major pathway to success. During her earliest years of education, Campos Johnson remembers her Titi Maria (known to her as Titi) who, as an educator herself, catalyzed Campos Johnson’s love for helping people. Titi, Maria Rivera, was a neighborhood institution in East Chicago. A Puerto Rican immigrant and teacher, Maria cared for all of the neighborhood children during the summers including Campos Johnson. Under her Titi’s care, Campos Johnson learned to value children for who they are and to be an example of what is possible.

As an elementary student, Campos Johnson was hyper aware of the impacts of language in her community. When her parents decided to leave East Chicago for a town with less racial and ethnic diversity, she struggled to value her first language, Spanish. The purpose of the move was to give Campos Johnson access to a seemingly higher quality education, but an unintended consequence of the move was the loss of her desire to speak Spanish.

As an English Language Learner, literacy was of the utmost importance for Campos Johnson. Due to her ELL status, teachers placed her in special education classes that weakened her confidence and catalyzed feelings of shame connected to the Spanish language. From that point on, Campos Johnson made a decision to stop speaking Spanish altogether in order to succeed in school. While she did thrive academically after making that decision, she later realized that she sacrificed an important part of herself in order to be successful. Now as an educator, Campos Johnson is able to encourage students to show up as their full selves.

After graduating from high school, Campos Johnson initially attended Purdue University to study math and science, but a number of experiences led her to pursue education instead. As a student at Purdue she pledged a Latina sorority, Delta Phi Mu, and she began to volunteer for Aprende Ayuda, an organization dedicated to teaching Latinx families English and foundational skills. After realizing that working with these families brought her joy, Campos Johnson knew that she wanted to pivot to become an educator. After taking time from school to care for her sick mother then trying the nursing track, she committed fully to becoming an educator and completed her Bachelors in Spanish Language Teacher Education at Purdue. She then moved to Indianapolis and attained her Masters in Elementary Education and Teaching as well as her Diploma in Education Leadership and Administration from Marian University. She then went on to complete the Relay Graduate School of Education NPAF (National Principal Academy Fellowship) program.

Throughout her formal teaching career, one thing has always remained constant for Campos Johnson: there are ample opportunities to bridge racial and cultural gaps within the Latinx community using education. At Global Preparatory Academy where she began as an elementary school teacher then went on to become Assistant Principal and Principal, she was able to do just that. As a student that struggled with language, she empathized with children working to balance English and Spanish showing them that it is possible to be proud of who you are while learning new things.

Since the pandemic began in 2020, Campos Johnson has had a host of new experiences that have challenged her own growth. As an assistant principal during the end of 2020, she was tasked with building a framework for students to have the online resources they needed to learn. During this difficult time, Campos Johnson and her staff stretched themselves to a new capacity. She created user-friendly directives for online learners while supervising staff remotely. She also worked alongside the school social worker to deliver devices in person to students who needed them. Reflecting on that time, she understands how critical it was to support her staff’s selflessness, being sure not to ask staff members to do anything that she herself was not willing to do.

Even through the adversity of the pandemic, she persisted and became even more committed to the field of education. For Campos Johnson, staying in the field was critical because the pandemic shook the lives of students everywhere and now, more than ever, students need support to learn effectively.

Today, as School Principal for Enlace Academy, Campos Johnson knows that the future of education in Indianapolis is critical to the success of the community at large. For her, providing resources for better language access is essential to the future of Indianapolis. In addition, she knows that it is necessary that Black and Brown educators prioritize investing in one another in order to build a stronger framework for the students they serve. During Spring 2022, Campos Johnson, alongside Carlota Holder, hosted a book study of For the Brown Girls by Prisca Dorcas. The two led a month-long intensive self reflection and identity study with more than 20 women nationwide. With more resources and stronger coalitions of educators leading with love, the system can do amazing things.

Stephanie Campos Johnson began her career with the belief that all students deserve to be seen and loved, and as she rounds year 17, she is only more inspired and excited to get the work done.